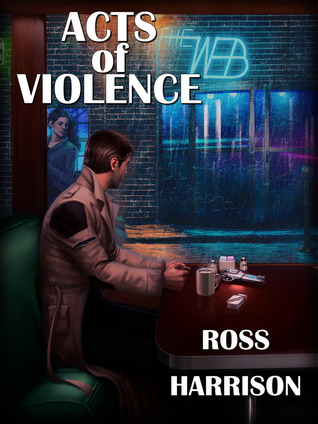 My name’s Jack Mason. I made a mistake. Took home the wrong girl. Now she’s dead. Cut up. And they’re telling me I did it.

It’s the same cop that tried to take me down ten years ago. Now he’s coming at me hard. And he’s not the only one. Cole Webster, the city’s crime lord, thinks I stole from him. Broke me out of custody just to ask me about it. Then I killed his son. Now he really wants me.

Add to this equation a government agent, and I’m a real popular guy right now. Pretty much everyone I meet wants me dead, lawfully or otherwise. There’s nowhere to run. Nowhere to hide. I’ve got till morning to uncover Webster’s trafficking operation and take the heat off me. And all I’ve got to go on is a pissed off homeless girl with a thirst for revenge.

Guess it could be worse. Can’t quite figure how.

Ross Harrison is the author of three novels and two short stories. Although he doesn’t stray from science fiction, he has ventured into multiple sub-genres, including space opera, thriller, noir, and steampunk. He has been writing since childhood, and occasionally likes to revisit those old stories for a good cringe and nervous laugh.

Ross lives on the UK/Eire border in Ireland, where he moved from England in 2001, hoping the rain will help his hair grow back.

Disclaimer: I received a free copy of this from the author in exchange for an honest review. All opinions expressed are my own and have not been influenced through outside sources in any way.

You know those old cartoons you’d read in the Sunday newspaper? The ones where the P.I is sitting in his dingy office, smoking a cigarette with the smoke wafting across the room. Then a woman walks in in need of help? And yet you never see the P.I’s face form under his hat? This book had that feel to it. From the first page right through to the end, I felt like I was living in one of those Sunday newspaper cartoons. It was brilliant.

Harrison’s fast-paced writing had me zooming through the book in record time. Filled to the brim with action and suspense, I relished each word on each page. Set on a planet out of Harrison’s NEXUS universe, this book had a slight sci-fi twist to it, but the story focuses on the completely on the characters and the plot, and the world is just along for the ride in this book.

It starts off great, with the main character standing up for a woman, because he doesn’t like acts of violence towards women, which scored a big plus from me. Jack is the perfect character to me. He seems emotionally detached for most of the book, and then bam! a bout of anger from him flies across the page. His back story is mostly hidden and that gives the reader an air of intrigue, which is exactly what I like from a main character.

Before reading the book, I read some of its previous reviews, so I knew to expect a twist. There I was expecting the author to go all out and make this big revelation out of the twist, but Ross Harrison surprised me even more with his method of delivering the twist. No fireworks, just there in the middle of a sentence, that I was already two pages ahead before I realized what I read. Needless to say, I back tracked the two pages and just stared. Nicely done Ross Harrison.

I really enjoyed reading this book, and being that it was my first endeavor into Harrison’s universe, I can say that I will be returning to it and gladly.

One thought on “Acts of Violence by Ross Harrison **Review**”