Hiya Bookishlovers! I’m so happy to be hosting Annie Seaton on my blog today for a guest post. I LOVED Hot Rock. Annie sure has managed to pull me in with her writing and man am I glad. Not only does she write fantastic romance stories, she’s also one very cool woman and I’m lucky to be part of Annie’s author street team, which by the way, is completely awesome! Now according to the blog tour schedule I have at the bottom of this post, I was supposed to do this post yesterday, but thanks to power outages over the past week, I haven’t been able to anything. But hey, better late than never right? 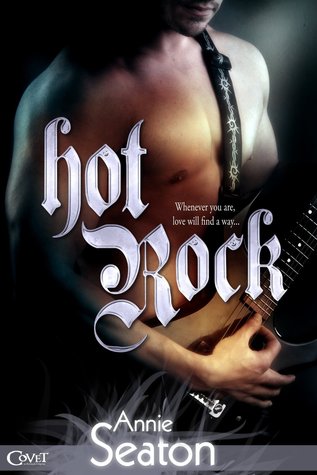 Megan Miller is on a dream trip to research her doctoral thesis at a rock festival in England. When she arrives in town she’s stunned that her temporary neighbor is the spitting image of her 70’s rock idol, too bad he’s also a world-class jerk. So why can’t she stop thinking about him?

Seventies rock star Davy Morgan is a man with a secret: rockin’ in one time and living in another. He holds his privacy close to his heart, so when a beautiful girl who not only loves but truly understands his music moves in next door, he works overtime to keep her at a distance. Easier said than done.

Megan follows Davy to the rock festival, but it’s not what or when it seems. The lure of the music draws them closer, but can their new found love span across the decades, or will it get lost in time?

Annie Seaton lives on the beautiful east coast of Australia, where she loves sitting in her writing chair, gazing at the ocean and writing stories. She has always been fascinated by romance and has found her niche writing contemporary romance.

Her debut novel, Holiday Affair, a contemporary romance set in the South Pacific was released as part of Entangled Publishing’s Indulgence line in March. The sequel Italian Affair was published Spring 2013, followed quickly by Outback Affair,Dangerous Desire and Tangling with the CEO!

Blind Lust, is one of Annie’s favorite novels. Despite the title…it is a sweet romance about a witch and her difficult choice between two men.

1. I love every aspect of my writing life. The thing that bothers me the most is the lack of time. I have so many stories I want to write and the time taken up by edits and promotion eats into the writing day. I suppose the one thing that that really terrifies me is not making my edit and book deadlines!

2. Music influences my writing the same way as the sound of the ocean does. I connect with songs and singers I love on a deeper level and it firs the creative music. Rather than providing words for me, it provides a feeling and kick starts emotions that I can then turn into words,

3. Things readers don’t know about Hot Rock…hmm… Davy Morgan is the most fabulous dream man from my imagination. He has the writing talent of David Bowie, he sings like Peter Frampton and he looks like David Essex… who can resist those eyes!

4. When I was first approaching publishers, I expected to paper a wall with rejection notices and wait for years before I was accepted. I sent my very first submission off in May 2011 for Winter of the Passion Flower, the first little story I wrote. Five days later I had been offered three contracts for the book…and I was overwhelmed! A few months later when I subbed Holiday Affair to my wonderful publisher, Entangled Publishing, I received an email back very quickly to say they loved it and wanted to offer me a contract. It was the week before Christmas and I ran to my husband and burst into tears. He thought I’d had bad news. It was fabulous news…I still get emotional with every contract offered and I am now up to #10 with Entangled!

Thanks for joining me Annie, and telling me a few thing we didn’t know about you.

Now there is also a very awesome giveaway going on and it is international! Click the link below to enter the giveaway for a $20 Amazon/Barnes and Noble giftcard and an ecopy of The Romance Abroad Bundle.

After you’ve entered the competition, stop by the blogs below and check out their posts for the blog tour.