Hi BookishLovers. Have you ever read a thriller that had you laughing with almost every sentence? No?? Well then you probably haven’t read Gregg Bell’s The IWS Rules: Book One: Rise of The Animal Rescue Feminists. 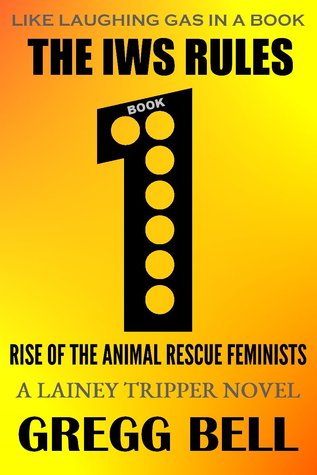 Lainey Tripper is no doughnut-eating bounty hunter. She’s a whiskey-drinking hard-living animal rescue feminist. But she has just this one little problem: she can’t seem to stop killing men.

The nefarious misogynistic dog-hating Donovan has taken his evil to a new level—stealing all of Chicago’s dogs to sell them to China for lunchmeat. Only Lainey and the IWS, the radical feminist animal rescue group she heads, can stop him.

Will Lainey stop Donovan in time? And when she’s done, will any men be left alive?

A long time ago I wrote a book report for The Andromeda Strain by Michael Crichton . My Mom thought it pure genius. LOL (In hindsight I can see she was right!) 😉 But I didn’t think anything of it and didn’t write another thing for ten years. Then in college I got a couple of “A”s in English class. I was never any good at grammar or the rules, but the teachers liked the action and nerviness in my writing. But then I didn’t write another thing for ten years. Then I was leaving a meeting in the middle of the Chicago winter, snow drifts everywhere, and me and these guys (grown men, mind you) got into a good-natured snowball fight. We laughed so hard we were crying. A couple of days later, I saw one of the guys and was all excited remembering the snowball fight and started talking about it, and he was like, “Yeah, it was fun, but I lost my diamond wedding ring in that snowball fight.” Long story short: A week later I miraculously found my friend’s ring in the snow in between the ruts in the middle of the street. When I gave it back to him, he started crying, the ring turning out to have this huge emotional significance for him. I ended up writing a story about it, and another friend read it and said, “If you write ten more like that, I guarantee you I’ll get you one published.” So I wrote ten more stories (he never got one published!) and that got me started writing and I haven’t stopped since.

Disclaimer: I received this book free of charge from the author in exchange for an honest review. All opinions expressed are my own.

When I received the review request from the author, I was pretty intrigued. Since it is described as a thriller, though the author did say I would probably like the book since I love to laugh. Well, of course I had to give it a read.

I went into this book with the highest expectations ever, but unfortunately they weren’t exactly met. Sure I experienced a couple of laughs and the story was well-written and plotted but it lost its appeal after a while. It took me more than a week to finish this book, and I found myself going back and forth trying to decide if  I should continue reading it or just give up and put it in the pile of books that I haven’t been able to finish.

But I powered through it and finished it, because really, there is absolutely nothing wrong with this book. It’s funny and refreshing and it’s quite a different take on a thriller than I have read before. It lost its hold on me after the first few chapters, and I think it’s because it started to become repetitive. I found myself not laughing at Lainey’s antics anymore. I ended up putting the book down more than I was picking it up.

I’m pretty sure this book could be brilliant for other people and have that WOW factor, but it didn’t have any of that for me. I do however, look forward to reading more of Gregg Bell’s work since he has pretty amazing ideas.

You can find this book by clicking on any of the following links: