Happy Tuesday BookishLovers! I’ve been so busy reading through all the books I have to review, that I really haven’t felt the reviewing vibe in a while, but I’m back on track this week. The book I’m reviewing today is Hollywood Blackmail by Jackie Ashenden. 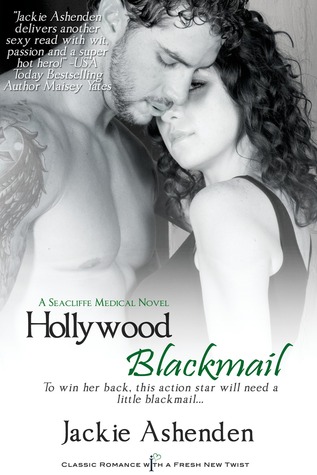 Lizzie Kent needs to forget the past. She lives in total anonymity, immersing herself in nursing to help her forget. But when a man from her previous life turns up in her clinic, the life she’s tried to create for herself may come toppling down.

Ash knows what he wants and he wants Lizzie, the girl who left him all those years ago. As Hollywood’s greatest action superstar no one says no to him, but when Lizzie refuses to acknowledge their shared past, he has to resort to a little old fashioned blackmail.

Will Lizzie revisit her past to enable her future with the man she loves, or do old wounds run too deep?

Jackie has been writing fiction since she was eleven years old. Mild mannered fantasy/SF/pseudo-literary writer by day, obsessive romance writer by night, she used to balance her writing with the more serious job of librarianship until a chance meeting with another romance writer prompted her to throw off the shackles of her day job and devote herself to the true love of her heart – writing romance. She particularly likes to write dark, emotional stories with alpha heroes who’ve just got the world to their liking only to have it blown wide apart by their kick-ass heroines.

She lives in Auckland, New Zealand with her husband, the inimitable Dr Jax, two kids, two cats and some guppies (possibly dead guppies by the time you read this). When she’s not torturing alpha males and their stroppy heroines, she can be found drinking chocolate martinis, reading anything she can lay her hands on, posting random crap on her blog, or being forced to go mountain biking with her husband.

I have to say I was quite surprised by this one. I’m not overly fond of the male characters in Jackie’s books, because they tend to be a bit douchy. One in particular that I didn’t like was Caleb from Talking Dirty With The Player. I could not stand the guy. So I went into this book with a lot of trepidation. And it only grew when I realised the male character in this book was a big Hollywood star. Did I give a huge sigh of relief when he turned out to be hot, sexy, funny and sweet? He wasn’t douchy at all. In fact he was basically perfect, a bit narcissistic, but when your face and body is your money maker, who wouldn’t be?

The story was, for the better part, good. But there weren’t any major moments that I could say wowed me. It wasn’t a storyline that kept me reading until the early hours of the morning and I found that I could very easily put it down. Nevertheless, I tend to always rotate back to Jackie’s work because her male characters are so freaking HOT!

You can read more about this book by clicking on the following links: