Hiya BookishLovers! I’m sitting here in my living room, looking at the storm that’s brewing outside and realized I need to get a couple of reviews up. I’ve been the master of procrastination the past week or two and focused more on reading all the fantastic materials than writing their reviews. I did however, manage to crank out a few words for a review. 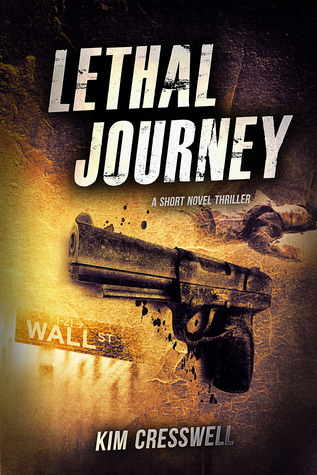 Manhattan District Attorney, Lauren Taylor, is about to take on the most important case of her career, prosecuting Gino Valdina, acting mob boss of New York’s most influential crime syndicate.

For three decades, Gino Valdina has led New York’s Valdina crime family. Since his recent indictment for murder, the leadership of the family is in turmoil, appalled by the death of one of their own, Gino’s wife, Madelina. Without the support of the family behind him, Valdina will do anything to save himself.

But Lauren soon discovers, things aren’t always as they seem when she’s tossed into a mystery, a deadly conspiracy that reaches far beyond the criminal underworld and a journey into the past makes her a target…and anyone she’s ever loved.

Trained as a legal assistant, Kim has been a story-teller all her life but took many detours including; working in legal and adult education before returning to her first love, writing.

LETHAL JOURNEY (December 2013) was a finalist in From the Heart Romance Writers (FTHRW) Golden Gate Contest (2003).

Her action-packed thrillers have been highly praised by reviewers and readers. As one reviewer said, “Buckle up, hang on tight!”

I love a good romantic-suspense novel and I was so happy that this one exceeds the expectations I had for it. I’m used to a suspense novel that only gets intriguing by at least the 15th page. Lethal Journey is not one of those books. I was pulled in from the get-go and couldn’t stop reading no matter how hard I tried, and only stopped once real life hit me over the head and made me put it down.

The plot was strong and well-written, without leaving even a little bit of a clue as to whodunit. I loved that, because when it all came out, it made the shock-factor go through the roof. Fast-paced and completely riveting, this book was everything I love about romantic thrillers. The tension between the two main characters leaped off the pages and their chemistry had me burning up and more than once I shouted at the page that the two of them should just get a room and work things out. Of course, in the next sentence something related to the mystery would happen and bam! Sexual tension dissipated. But it never lasted long.

There was a big douchebag idiot in the book and boy was I happy at the way his story played out. Some might pity him, some might hate him. Me? I just got this warm feeling close to the end.

Typically I would give this book a five-star rating, but I’m giving it a four, because I would have liked a bit more of the characters backstory and I found it was a bit too short for my liking. Still an amazing read and a fantastic book that is perfect for a stormy night.

You can find Lethal Journey by clicking on the following links: