Hey BookishLovers! Have you ever picked up a book that you never would have read? And if you had, have you been blown away by it? That’s exactly what happened to me with this book. So today I’m sharing this book with you. 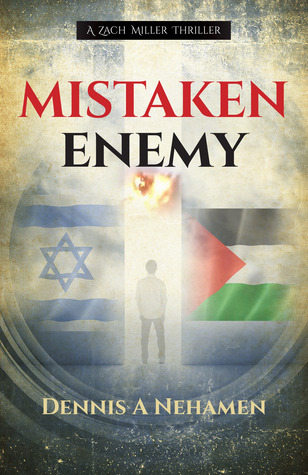 Freelance writer Zacchaeus Miller travels to Israel, where he is told he has the ability to impact the lives of millions. He dives into the culture of his surroundings, in the end accidentally exposed to inside information threatening international borders. Burdened with the knowledge of an underground terrorist plot soon to be executed, the protagonist is then forced to play a role in the crisis. In a race against time, and an ongoing struggle to declare his innocence, he must intercept the impending attack or watch helplessly as innocent people are slaughtered and nations destroyed. But even the unintended emissary isn’t sure which side he is on.

Controversial, addicting, and bold, Mistaken Enemy is compelling new author Dennis Nehamen’s first release of the Zach Miller Thrillers. What begins as the captivating chronicle of one man’s exploration of a foreign land soon becomes a heart-racing account of hate, revenge, and conviction, ultimately testing the boundaries of human love. 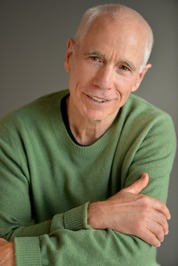 Dennis A Nehamen (pronounced nee-min) was born and raised in Los Angeles.

He attended U.C.L.A. and earned a Ph.D. in Psychology. His practice has spanned several decades, both as a forensic and clinical psychologist. With deep insights to the human psyche, Dennis has served as a psychological consultant at the heart of various dramatic and traumatic situations. As a result, his writing has unusual depth and is vividly authentic. During the past several years he began surrendering to a compulsion to write, which originated several screenplays, novels and an award-winning musical. Mistaken Enemy is the first release of his Zach Miller Thriller series, due in early 2014.

Dennis enjoys the outdoors, and hiking especially. He lives in Los Angeles, California with his wife who fortunately is willing to share him with his other love, writing. They have a dog, named Henry Higgins.

First off, I feel the need to come clean. I only accepted this review request, because it came in such a unique way. Instead of having the author or their publicist requesting a review, the main character Zacchaeus Miller, introduced himself and asked for a review, if he is still alive by the time I am done with it. I was so impressed with that different approach, that I didn’t think twice about accepting the request. And I’m happy I did, because I know I never would have picked up this book on my own. Needless to say, I was everything but disappointed when I finished this book.

I really have no idea where to start with my review for this book, because I have so many thoughts running around my mind with this book. This book starts off already jam-packed with intrigue and it keeps building right through to the end. There were some things throughout the book that I felt were unnecessary and overloaded my brain with too much information, but in the end it all came together and fit nicely.

I’m pretty amazed by this book. I can imagine the author spending days and weeks on end just researching and all that research paid off. The settings were so descriptive that during the time that I was reading the novel, I felt like I was right there with Zach. The places he saw and the experiences he went through felt completely real to me.

Zacchaeus Miller is one of the best thriller characters I have read. A freelance writer who travels to Israel on the word of a young Native American boy, that it is part of his destiny. So he loans some money from his mother, upsets her beyond anything he’s ever seen before, packs his bags and jets off to Israel. Just like that, on a whim. To Israel of all places! I mean the guy has to have some ball right? People blow each other up there on a regular basis and if they don’t use bombs, they pretty much fire any gun they can get their hands on. And besides that he actually goes and stays with a family, who he really has no clue at all about. So kudos to Zach for doing that.

So many things unfold throughout the book that I just want to blab the big stuff out, but I won’t because I’m a spoiler-free kinda girl. All I can say is that this book, definitely earned its space on my list of books I’ll reread more than once.

And Dennis, hurry up with the next Zach Miller book, okay?

You can find Mistaken Enemy by clicking on the following links:

I also managed to snag Dennis away from plotting through what torture and hell he’s going to put Zach next and asked him a couple of questions.

Hi Dennis, thanks for taking the time to answer some of my questions. Your book enthralled me so much, that I absolutely had to ask you a couple of questions.

Thank you! I’m glad you enjoyed it!

1.How did you come up with the idea for this book?

I went to the same mountain Moses visited to receive The Ten Commandments. In a sense, I’m not jesting. It might sound corny, but all my stories I think of as divinely delivered; blessed gifts from an unknown source. In the case of Mistaken Enemy, it was the ending that captivated me, a unique approach to world peace. With that as an anchor, I went back to the beginning and…the characters and location fell into place.

2.I was amazed by the background of this story and I know you must have put tons of research into it. On average, how many hours (or days) of research do you think you put in to write this novel?

When I began the project I had no idea what I was tackling. But once the Israeli-Palestinian conflict became the focus for the central theme, my challenge began. In answer to your question, I’d have to make an estimate based on the number of books and articles I read. That said, it had to be a couple months cumulatively to get comfortable with the material.

3.What was your process while writing this book?

When I’m crafting a story, I never want to leave it—it tends to stay with me even when I’m sleeping; not infrequently I’ll awaken with an idea and then write it down. During this period that I refer to as “production,” I have a tendency to screen out most extraeous influences and distractions. I’ll begin writing as early as possible and work until I plop…around dinner—I’m a morning person.

4.What books, would you say, have influenced your life and writing most?

John Fowles, The French Lieutenant’s Woman, for its pure literary magnificence, Tom Robbins, Skinny Legs and All, for cleverness and imagination, John Steinbeck, East of Eden, for characterizations and descriptions that are indistingishable from reality, Ayn Rand, Atlas Shrugged, for blending deep philosophy into an exciting story line, and Marvin Harris, Cows, Pigs, Wars and Witches: The Riddles of Culture, for tempering the tendency toward prejudice and ignorance we as humans must admit to if we are to be true to our higher self.

5.Did you travel to research this? Have you ever been to Israel?

I have been to Israel though I did not go there to write the book. The images and impressions left from my visit to that country are vivid, definitely helping me to paint the landscape as the story evolved.

6.If you had to rewrite this book, would you change anything?

I’m still developing my writing skills—a lifelong process, I assume. If I were to edit Mistaken Enemy again—for the thirty-somethingth time—I might change a word here or there but honestly the story shaped up to where I’m truly happy with it. There comes a point when revisions can subtract from the project.

7.I can’t wait to read more about Zach’s adventures. Are you working on the next book yet?

The second book in the series is completed, as are another three books in the series. The second Zach Miller Thriller takes place on an Indian reservation, a tale that weaves two plots, one involving the disappearance of a musical icon and the other pertaining to murder and corruption—Zach finding a way to get mixed up in both. I haven’t set a date yet for its release but it will be in the near future.

8.What challenges did you encounter in bringing Mistaken Enemy alive?

Tearing my hair out trying to get it “perfect.” The pace of the story, the consistency of the characters and the developmental flow all have to be in sync. After innumerable revisions—each time being convinced that at last it was ready—to re-read it and recognize pages where the story dragged, the dialogue was tinny between a couple characters, or a clue had not been adequately accounted for… it all gets pretty discouraging. Later I realized that the problem was, Me. I needed to accept that to create an artistic piece with the complexity of a full novel is a tough assignment from start to finish. Coming to grips with that obvious truth made it easier as I continued each and every subsequent edit—I think it’s called pride.

9.What was the hardest part of writing Mistaken Enemy?

There were times during the writing of the early drafts that I was so lost in the story I couldn’t find my way through it. It was unnerving because there was Zach, vulnerable, alone and endangered, and I didn’t know how to help him. I found with patience the answers came…and usually the right ones. Also, striking a healthy compromise regarding how much history to infuse into the story, and then how to sprinkle it rather than load it up in gobs, took more work than I imagined it would.

10. I’m aspiring to have a book published someday, and I found that at times, I really think I’m not cut out to write and that I should just give up. What would be your advice to other aspiring novelists who also feel like giving up?

I began with writing a few screenplays and then books for musicals. Authoring a complete novel? I couldn’t imagine doing it, especially when I thought about some of the greats I admired, Hemmingway or D. H. Lawrence. I kept dismissing the idea, owing mostly to being terrified that I’d fail. But once I began, I couldn’t stop. Now that I overcame that battle, my advice to others making their way up that same mountain would be: Author the book and then think about giving up. If you love writing, you’ll never be able to quit anyway. That’s really the key, commitment—or fear to commit. Creating a book is an artistic endeavor; it owns you, …it’s totally scary, similar to having a child. But what’s the worst that can happen? If your suspicions prove true and you’re not the next J. K. Rowling, there’s no heartache. If your good, that’s when you have to start worrying.

Thanks again for taking the time to answer my questions. I hope the wait for the next Zach Miller novel won’t be too long.

Thank you Monique! The cover art is coming along as I’m taking this interview so it’ll be coming soon, I promise!

Have you ever been amazed by a book you never thought you’d ever read?