Bookishlovers! I’m sad to say that today is the last day of my Rachel Harris showcase, but we’re about to have tons of fun because the darling Ms Harris has provided me with few fun things for today!

First up we have a Lesson in Renaissance Social Graces from Cat Crawford in My Super Sweet Sixteenth Century.

Okay, I admit it. I’m not exactly an expert on the subject.

In fact, I turned screwing up during my Renaissance vacay into an art form.

But the upside is I learned from my one or two (okay, maybe more like a bazillion) mistakes, and I’m here today to share my wealth of knowledge in the hopes I’ll spare you the drama I went through… you know, just in case you find yourself breezing through the flaps of a certain green gypsy tent.

So here my compiled list of handy-dandy tips—with possibly the world’s longest title ever:

Cat Crawford’s List of Traits Any Self-Respecting 16th Century Chica Should Know to NOT Look Like A Cultural Ignoramus:

So there you have it, my quick list of must-know traits to blend in with the well-to-do of Renaissance society. Of course, there’s more to it then this short list, but if you can manage these things, you’re well ahead of where I was. Oh, and don’t forget to pack this handy-dandy list in your extra handy-dandy backpack, and keep that baby with you at all times. Trust me, it’ll be worth it.

So how do YOU measure up on this list? Are you a natural Sixteenth-Century Chica, or a Cultural Ignoramus like me? Let us know in the comments!

Okay are you all ready for a little game?? Let’s play some super fun Mad Libs from A Tale Of Two Centuries. Leave your words in the comments and have a ton of fun!

Inside, it’s _____(adjective), with only a few lit candles illuminating the space. The ____(noun) closes behind me, but for the effect, it may as well be a steel ____(noun)—the outside noise is completely muffled. I take a step, and gravel ______(verb) under my ______(article of clothing plural), sounding all the louder in this spooky setup.

I really don’t get how Steve Madden gladiators will interfere with a psychic reading, but whatever. I’m being ______(adjective).

________(ing verb) farther inside, following the trail of dotted candlelight, I continue to be amazed at how large the space seems. It’s a freaking tent, and not even a big one at that, yet I feel as though I could walk _____(adverb) forever. One side is completely lined with shelves, and from the flickering flames of the candles, I can see rows of teacups, labeled vials, unlit candles, crystal ________(plural noun), and stacks of cards.

As I _____(verb) toward the back of the tent, the smell of patchouli incense tickles my nose, and I see a small card table with a black silk sheath draped over it. Resting in the middle is a large sapphire-colored candle, its flame a spotlight on the woman ______(ing verb) behind it.

I’d love to see how everyone’s Mad Libs turn out so please leave it in the comments!

And now for the very, very, extra special treat that Rachel has provided! A kinda kissy scene from her upcoming book The Fine Art Of Pretending.

First though, some info about it: 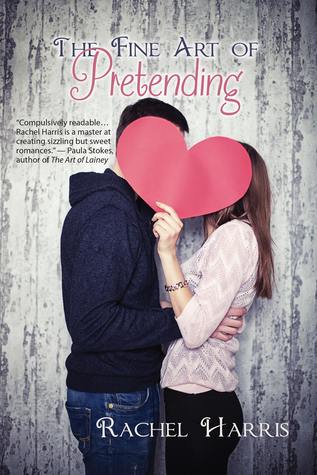 According to the guys at Fairfield Academy, there are two types of girls: the kind you hook up with, and the kind you’re friends with. Seventeen-year-old Alyssa Reed is the second type. And she hates it. With just one year left to change her rank, she devises a plan to become the first type by homecoming, and she sets her sights on the perfect date—Justin Carter, Fairfield Academy’s biggest hottie and most notorious player.

With 57 days until the dance, Aly launches Operation Sex Appeal and sheds her tomboy image. The only thing left is for Justin actually to notice her. Enter best friend Brandon Taylor, the school’s second biggest hottie, and now Aly’s pretend boyfriend. With his help, elevating from “funny friend” to “tempting vixen” is only a matter of time.

But when everything goes according to plan, the inevitable “break up” leaves their friendship in shambles, and Aly and Brandon with feelings they can’t explain. And the fake couple discovers pretending can sometimes cost you the one thing you never expected to want.

“Dude, what’re you waiting for?” Carlos calls. “Plant one on her.” I lift my eyes and am shocked to see Brandon is staring at my mouth. He swallows audibly and flicks his gaze to mine. The emotions darkening the soft green color are too confusing to name. Does he want to back out? An exhale of breath leaves Brandon’s lips, almost like a laugh, and he scoots closer to me on the blanket. I twist my legs under me, sitting tall as I face him. He cups my chin and tilts it toward him, drowning me in the now dark green depths of his eyes. The cologne I gave him for his birthday fills my head. It’s woodsy and yummy, and I always loved how it smelled on the store testers; but on Brandon, it’s even sexier. My eyes flutter closed and I inhale again, this time slowly. Goose bumps prickle my arms, and my head gets fuzzy. Brandon slides his hand down the column of my neck and brings the other up, threading the fingers of both through the hair at my nape. His breath fans across my cheek and everything south of my bellybutton squeezes tight. When his mouth first meets mine, it’s hesitant, questioning. But as I move my lips with his, he quickly grows bolder, coaxing them apart. Desire, pure and raw, electrifies my veins as his tongue sweeps my mouth. A whimpering sound springs from my chest and instinctively, I wrap my arms around his neck, tugging him closer. Needing more. My teeth graze his full bottom lip and I pull it, sucking on it gently. He moans and knots his fingers in my hair, and a thrill dances down my back.

Guys, I’ve had ton of fun this past week and I just want to thank Rachel for providing me with all the fun stuff and for being so awesome!

2 thoughts on “It’s The Last Day Of The Rachel Harris Showcase!”