Bookishlovers! We’re nearing the end of this superbly awesome week or so that I’ve been showcasing Rachel Harris’ work. But it’s not the end yet. Today I’m spotlighting Seven Day Fiance and I also have a review for it. 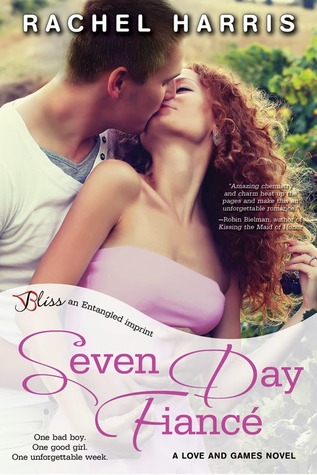 One bad boy. One good girl. One unforgettable week.

Angelle Prejean is in a pickle. Her family is expecting her to come home with a fiancé—a fiancé who doesn’t exist. Well, he exists, but he definitely has no idea Angelle told her mama they were engaged. Tattooed, muscled, and hotter than sin, Cane can reduce Angelle to a hot mess with one look—and leave her heart a mess if she falls for him. But when she ends up winning him at a charity bachelor auction, she knows just how to solve her fiancé problem.

Cane Robicheaux is no one’s prince. He doesn’t do relationships and he doesn’t fall in love. When sweet, sultry-voiced Angelle propositions him, he hopes their little fiancé game can finally get her out of his head. He doesn’t expect her to break through all his barriers. But even as Angelle burrows deeper into his heart, he knows once their seven days are up, so is their ruse.

Author of fun & flirty escapes about sassy girls-next-door and the hot guys that make them swoon. I grew up in New Orleans, watching soap operas with my grandmother, and staying up late sneak-reading my mama’s romance novels. Today, I still stay up late reading romances, only now I do so openly.

A Cajun cowgirl now living in Houston, I firmly believe life’s problems can be solved with a hot, sugar-coated beignet or a thick slice of king cake, and that screaming at strangers for cheap, plastic beads is acceptable behavior in certain situations.

I homeschool my two beautiful girls and watch countless hours of Food Network and reality television with my amazing husband. I write YA, NA, and Adult romance and LOVE talking with readers!

Just over two hours. That’s how long the trip from Magnolia Springs to Bon Terre was. Cane hated being still for two minutes, and sitting inside a truck for that long was practically torture. That’s why he had bought his bike. Riding demanded his total attention, complete immersion. With the wind hitting his face, the energy of the engine ripping through his body, and his synapses firing to stay alert, Cane felt alive. Free. Unconstrained.

But damn if driving with Angelle tucked beside him, the sweet scent of sunflowers filling the cab, didn’t make him feel alive, too. And turned on. This plan of his better work. So far, close proximity only served to heighten his desire, and it was beginning to grate on his nerves. Tightening his grip on the steering wheel, he asked, “Anything I should know before we get there?”

Angelle startled. Cane realized it’d been quiet, with not even the radio playing, for going on ten minutes. Apparently, they’d both been lost in their own thoughts. And from the way she’d jumped at the sound of his voice, he’d like to know what hers involved.

With a nervous laugh, Angelle glanced over, dropped her gaze to his mouth, and then quickly looked away. Interesting. “Well, yeah.” Then she frowned. “A whole lot of stuff, actually. If you’re my fiancé, you should probably know everything there is to know about me. And I should know about you, too.”

The smooth skin between her eyes furrowed as she nibbled on her bottom lip—an expression Cane had seen far too often over the last five months. It meant she was worried, nervous, maybe even scared, and for once, he could understand why.

“Don’t worry about it, Angel. We’ll figure it out.” He sent her a confident smile, hoping he was right. Spending the holiday with this charade blowing up in his face was something he’d really rather avoid. “We have two-plus hours to get a crash course in each other. Plenty of time to hit the highlights.”

Angelle nodded distractedly, clearly unconvinced, and began tapping a rhythm on her lap. Cane knew a thing or two about nervous habits, so he placed his hand over hers to calm her down—and caught her shiver from the corner of his eye. The tapping stopped, and he bit back a smile.

Now unable to help himself, knowing his touch affected her, Cane encircled the slender bones of her wrist with his thumb and finger. Angelle was tough, but she was also much more delicate than any woman he’d ever known. So feminine and vulnerable. The contradictory mix fascinated him. It brought out every protective instinct he had, and attracted him like nothing else before.

On the underside of her wrist, the site of her tattoo, he felt the raised skin of a scar. Curious if the injury linked to the mysterious one-word brand, he grazed the pad of his thumb over the mark. Her pink lips parted. When he did it again, her head lolled, and her breath caught.

The stuttered sound, the rise and fall of her chest, the way her hand flexed and curled as his thumb drew slow circles…it only made him want her more. He hadn’t thought that was possible. And when her head shifted and she peered up at him with unmistakable, unhidden desire, well, it was all over.

Cane gunned the accelerator. Flipping on the turn signal, he switched lanes, headed for the rest stop an exit ahead. Angelle’s voice was whisper soft when she asked, “Where are we going?”

“We need to get something out of the way right now.”

Man, Rachel sure knows how to get me swoony and sighing all kinds of happy sighs. I had so much fun reading this book. Seven Day fiancé was everything I had been expecting and more. It lived up to the expectations I hadn’t even known I had until after I finished reading it. But hey, Taste The Heat set the bar high.

This whole book was freaking awesome. As someone who dreams of robbing a bank (or you know, winning the lottery) and seeing New Orleans, I just love the fact that this is set in New Orleans. Add in a very sexy bad boy, who just happens to be a closet nerd and my knees go weak just thinking about Cane. In fact, I’m pretty sure I lost concentration whilst reading this book, because I was daydreaming about Cane. Hell, I’m pretty sure I replaced Angelle with myself in a couple of the scenes, and if you’ve read this book, you’d know there’s one scene on particular where we all wanted to replace Angelle with ourselves. Because Cane is just so damn hot. And caring and sorta sensitive. And don’t we all just want that in a man?

Now don’t get me wrong, I adored Angelle. She’s one rocking redheaded chica that had me laughing my ass off more than a few times. Hell, she left behind her life and her family to go become a freaking firefighter! And her parents won’t believe she’s happy until she’s got a ring on her finger, which of course, would lead anyone to lie about their relationship situation. I loved that she was still a virgin at her age, not for religious reasons, or waiting until marriage, but because she wanted to wait until she met the right man and felt comfortable.

I completely admire Rachel for bringing these two characters to life for me. Together they are a match made in heaven and embody everything a romance should. Rachel Harris created a story I completely fell in love with.

Come back tomorrow for the last day of Rachel Harris Time! Fun stuff in store for you and a sneak preview of her soon-to-be released book the Fine Art Of Pretending