Hi Bookishlovers! Let me tell you, I’ve had a blast the last couple of days. We’re on a fishing trip, which basically means that I’ve been watching my SO fish whilst I get to enjoy tons of reading. The only bad thing? I’ve spent almost no time on the laptop. But since my SO is sleeping off the effects of the copious amounts of alcohol that was consumed last night, I’ve decided to put my fingers to the keys. So I’m continuing my Rachel Harris Week. Today I’m spotlighting Taste The Heat. I adored this book and it was the first Rachel Harris book I’ve read. 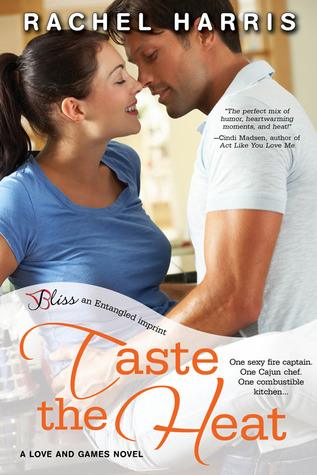 One sexy fire captain. One Cajun chef, One combustible kitchen…

When chef Colby Robicheaux returned home to New Orleans to save her family restaurant, the last person she expected to reconnect with was her brother’s best friend and her childhood crush. As tempting as a sugar-coated beignet, Jason is one dish she doesn’t want to taste. Colby is counting down the days till she can leave the place where her distrust of love and commitment originated and go back to Vegas.

Fire captain Jason Landry isn’t looking for love, either. He knows he should focus on finding the perfect mother for his daughter, but when he first sees Colby, all grown up and gorgeous, he can’t help but be drawn to her. And when she suggests a no-strings-attached fling, Jason doesn’t want to say no.

As their relationship grows more intense, Colby finds that Jason isn’t as easy to leave behind as she thought. Could turning up the heat on something real be worth the possibility of getting burned?

Author of fun & flirty escapes about sassy girls-next-door and the hot guys that make them swoon. I grew up in New Orleans, watching soap operas with my grandmother, and staying up late sneak-reading my mama’s romance novels. Today, I still stay up late reading romances, only now I do so openly.

A Cajun cowgirl now living in Houston, I firmly believe life’s problems can be solved with a hot, sugar-coated beignet or a thick slice of king cake, and that screaming at strangers for cheap, plastic beads is acceptable behavior in certain situations.

I homeschool my two beautiful girls and watch countless hours of Food Network and reality television with my amazing husband. I write YA, NA, and Adult romance and LOVE talking with readers!

Colby’s shoulders shuddered with an attempt at a calming breath. Jason squeezed her tighter, stifling a groan as the tips of her breasts pressed firmly against his chest. He slid his hands to her waist, and Colby lifted her head with a shy smile.

She nodded and licked her lips. “Thank you. I don’t normally do the ugly cry. It felt good.” She gave a self-deprecating laugh and covered her face. “Although I’m sure I look like a hot mess right now.”

Sweeping her hands aside, Jason glided his thumbs across her cheeks. Wiping away the lines of smeared makeup, he looked into her clearing gray eyes and said, “You’re gorgeous.”

A flash of uncertainty crossed Colby’s face, and he bent his head to prove it.

The first brush of his lips was light. He didn’t want to take advantage of her emotions. He just wanted to assure her that regardless of her tears, she was still one of the most beautiful women he had ever seen. But when a sigh escaped her parted lips, and she fisted her fingers in his hair, Jason abandoned timid and gentle. He gave in to the desire that had been snapping and building between them since the day of the competition, and proceeded to kiss her senseless.

Reaching down, he palmed the smooth skin of her calf. It felt like silk in his hands. He skimmed his fingers down the soft length to her ankle, hooking it around his hip. Colby made a satisfied noise in her throat. She wiggled closer and, happy to oblige, he tugged her fully against him and deepened the kiss. He swallowed her moan.

Leaves rustled in the wind. Unseen wings fluttered and buzzed. And their heavy breaths filled the air, turning Jason on even more. Colby’s mouth tasted of citrus. Sweet, like the daiquiri she had drank, and like her. He teased the corners of her mouth. Licked the satiny skin of her upper lip. And gently bit down on her pouty lower one. He knew he needed to break the kiss soon—his daughter was sleeping in the tent only a few yards away—but this woman was like a drug. And he was quickly becoming an addict. Jason shifted to press his lips to the sensitive skin just under her ear.

Breathless and panting, Colby tilted her head as he trailed his mouth along the column of her neck. “I’ve always wondered,” she admitted with a shiver, “what it would be like to kiss you.”

He arched an eyebrow in surprise and grinned against her skin. “If memory serves me right, this is oursecond kiss.”

A shocked gasp of air escaped her throat. “You remember Kiss and Catch?”

He looked at her and nodded, remembering every stolen moment of that childhood kiss.

She gazed back with dazed eyes, and chewing the corner of a slightly swollen lip, admitted, “That was my first kiss.” Her tone was almost bashful, the flush of her skin darkening to rose before a hint of the vixen came back and she said, “Okay, so I’ve been curious how the adult Jason would compare.”

He chuckled as he dipped his tongue into the hollow where her pulse fluttered. “And the verdict?”

At her laugh, which he noted sounded like music again, Jason nipped the delicate skin and then licked it. Inclining his head, he confessed, “You were my first kiss, too.”

Colby went motionless in his arms and he leaned back, not surprised to see disbelief in her eyes. He shrugged. “I hadn’t come out of my shell yet.”

She grinned in delight.

Jason shifted her so she was out of the shadow and firelight warmed her face, then he said, “I have an idea.”

“No,” he said with a laugh. “But I like where your mind is.” Colby sighed with mock disappointment, and he added, “And you’re not too far off.”

That got her attention. Placing her hands on his thighs, she propped herself up and tilted her head, waiting for him to continue.

“Tonight I realized that we’re not that different,” Jason began. “We’ve both been burned by love, and neither of us have any interest in going back in for a round two. But we’re human. We have needs. And crazy chemistry.” Colby’s grin stretched into a wicked smile. “What would you say to an arrangement?” he asked. “One where it’s understood that feelings are off the table. Just fun, companionship, and a whole lot more of this.” He grasped her hips and tugged her closer so there was no mistaking what he meant.

She shook her head with a smile but locked her ankles around his back. “You had me at crazy chemistry,” she teased. Then her smile faltered a shade and she reminded him, “I’m leaving at the end of the summer.”

“I know.” He lifted his shoulder in a show of indifference. “It’ll be a summer fling.”

Colby’s eyes lit up at the word fling. “That, sir, may just be the best idea I’ve ever heard.” Smashing her mouth against his, she sealed their agreement with a kiss.

Victory tasted like citrus. He did it. He bought himself an entire summer with Colby, and maybe, just maybe, it would convince her to stay. He could be very persuasive when he needed to be.

And if his best friend ever found out what he just did, Jason would have his ass kicked.

I bought this book because I received the second book Seven Day Fiance for review purposes. I’m part of Rachel’s Flirt Squad and since everyone was raving about this book, I knew I had to get my hands on it. And boy, oh boy, was it worth the scornful looks I got from people around me, when I snuck off somewhere to read. Because this was my first Rachel Harris book, I wasn’t sure what to expect, but Rachel’s writing managed to invoke so many emotions in me that I just know I’ll always pick up her books.

I really wanted to jump through my computer, into Facebook and just smother Rachel with hugs, because I relate to Colby in so many ways. She’s insecure about her body, but I won’t say in a bad way, because reading her thoughts had me laughing my butt off and feeling better about my slightly disproportionate body. Colby was so real to me and the character read well. I fell a little bit in love with Colby and I’m not at all ashamed of the fact.

Now excuse me for a moment while I drool and slobber for a while. Because I have a huge weakness for firemen. And Jason is just the epitome of a sexy fireman, He’s the guy that haunts my dreams and make me daydream when I do the dishes. Rachel did a good job with him. Not only is he sexy, he’s amazingly fantastic and a very, very great father. And what woman wouldn’t swoon over that combination? I might just set my house on fire.

This was a fun, light read that I would highly recommend to anyone who just wants to take a load off and feel like they connect with the characters, drool about a gorgeous fireman and shed one or two handfuls of tears. Rachel sure knows how to make me smile and I adore this woman.

You can find Taste The Heat by clicking on the following links: