Hi Bookishlovers! I’ve never known a woman whose knees don’t go weak when a man has a southern accent. If he’s looks like sex-on-legs, well, that’s just an added bonus. So could you believe how happy I was when I read Sweet Southern Betrayal by Robin Covington and it had Mr. Sex-On-legs himself as the hero? Yip, I was very, very happy! 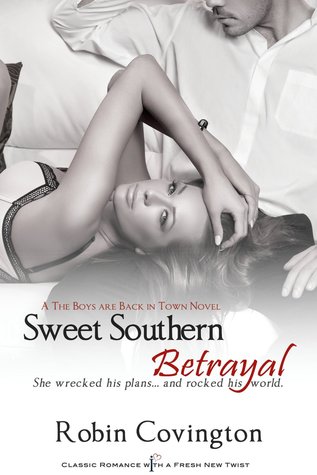 Privileged and ambitious attorney Teague Elliott is on the fast-track to getting everything he wants. All he has to do is stay on the straight and narrow and a high-profile political career is his for the taking. Until he wakes up naked with a Vegas showgirl…

Risa Clay has worked hard to put her showgirl past behind her and start fresh. But she owes ten grand to the wrong people, and to pay off her debt, she agrees to betray a stranger. . .but she ends up with a husband and guilty conscience.

Savvy and determined, she double-crosses the mob, goes on the run, and turns up on Teague’s doorstep armed with a dangerous secret, a marriage license, and the power to ruin his well-planed future. She thought using Teague again would be easy, but the passion that exploded between them in Vegas didn’t stay in Sin City and betrayal is the last thing on her mind.

Now Teague has to choose between the future he’s planned for all his life, or the one with Risa that he can’t turn away from.

Robin Covington, who NYT Best Selling authors, Robyn Carr and Carly Phillips, said was their new “auto-buy author”, writes sizzling hot contemporary and paranormal romance. A Night of Southern Comfort, her best-selling debut was nominated by RT Book Reviews for the 2012 Best Contemporary Romance from an Indie Press for bringing a “fresh, modern feel to the genre while still sticking to the things that get our adrenaline pumping — sex and danger”. When she’s not exploring the theme of fooling around and falling in love, she’s collecting tasty man candy, indulging in a little comic book geek love, and stalking Joe Mangianello.

Robin is a member of the Romance Writers of America, the Washington Romance Writers, a faculty member at Romance University, a member of the Waterworld Mermaids, a Goddess at The Naked Hero, and a contributor to the Happy Ever After blog at USA Today. You can find Robin on her website, Facebook, Pinterest, and Twitter (@RobinCovington).

Disclaimer: I received this book from Entangled Publishing in exchange for an honest review. All opinions expressed are my own.

Robin Covington’s writing is superb and I was panting for more by the time the book was finished. This book had everything you’d want from a romance novel. Sexy, enticing, with just a little bit of dirtiness to make you feel all hot and bothered. With a very sexy male hero that made me weak at the knees and a heroine that was sweet and honest but just kept getting herself in the wrong situation, it had the perfect recipe.

I’m a sucker for a southern gentleman and Teague sure as hell portrays my perfect idea of one. He knows what he wants and works hard to get it, but when life takes a turn and surprises him for the worst, he tries to handle the situation, but he doesn’t get a hold on it. Not surprising, since it’s kind of a big surprise to find out you married a Vegas showgirl on a drunken night out with your buddies.

Risa is a feisty redhead, who not only dances as a showgirl, but also owns a business selling tasteful “marital aids”. Not really the kind of career to have when your new husband wants to President someday. Risa is a very personal character, she’s amazing but her life is a complete mess. She appealed to me on so many levels. She’s a good person and she really goes out of her way to try to make things right. But when the marriage they’ve kept a secret comes out in the open and she starts to fall in love with Teague, everything turns around. Teague doesn’t believe he is capable of loving anyone and I don’t blame him after how his parents’ relationship turned out.

The storyline was perfect, the suspense kept me going and the loves scenes were steamy. I’m struggling to write this review, because I know it won’t do the book any justice, but here I am, trying my best to convey into words how amazing, how fantastic, and how satisfying it was to read it.

Bookishlovers, once again Entangled Publishing didn’t disappoint me. I’m starting to think they never will!

But don’t just take my word for it, see for yourself by clicking on the handy links here to see more about the book and to buy it too.

Do you love Southern men?

One thought on “A Sexy Southern Gentleman Is Just What The Doctor Ordered! Robin Covington’s Sweet Southern Betrayal **Review**”