Bookishlovers! Since today is release day for so many awesome authors, I’m posting another review, because well, I’m awesome like that and who doesn’t want to read all about some of the fantastic books that are out today? 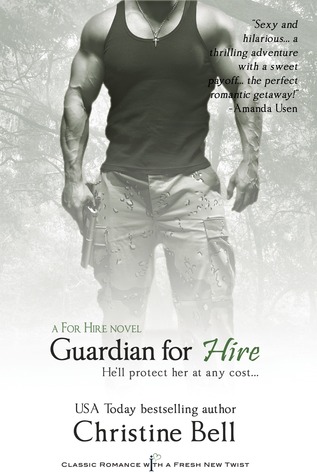 Psychologist Sarabeth Lucking’s life is turned upside down when the upscale couples’ retreat she works for winds up embroiled in the biggest scandal of the year. With her reputation in tatters, she can’t imagine things getting worse, until her former co-workers are murdered, one by one. A bad-ass, ex-Army Ranger might be able to keep her safe, but something tells her she’s getting more than she bargained for…

Gavin McClintock grew up on the streets of Edinburgh, and protecting prissy Dr. Stick-Up-Her-Rear isn’t high on his list of things to do. Still, a promise is a promise, and he’ll need a clear head if he’s going to keep her off the growing list of victims. He didn’t count on the fire in her, or how distracted he’d be by her. As the flames grow hotter, he starts to wonder if she’s the one who needs protecting.

Will Sarabeth and Gavin outrun a killer and give into the passion burning between them?

Christine Bell is a romance author and also writes erotic romance as Chloe Cole. She and her handsome hubby currently reside in Pennsylvania with a four-pack of teenage boys. If she gets time off from her duties as maid, chef, chauffeur, or therapist, she can be found reading just about anything she can get her hands on, from Young Adult novels to books on poker theory. She doesn’t like root beer, clowns or bugs (except ladybugs, on account of their cute outfits), but lurrves chocolate, going to the movies, the New York Giants and playing Texas Hold ‘Em. Writing is her passion, but if she had to pick another occupation, she would be a pirate…or, like, a ninja maybe. She loves writing steamy romance stories, but also hopes to one day publish something her dad can read without wanting to dig his eyes out with a rusty spoon.

Well, well, well. This was not what I was expecting from this book at all. I was so impressed by the suspense and thrill that this book had that I just had to keep reading. And read I did, right up until the last page. And then I went and bought Wife for Hire which is the first book in this series.

I loved the characters. The privileged girl from the rich family and the boy who grew up convincing himself that the rats were mice just so he could sleep, had me thinking of Aladdin and Jasmine. She’s been deprived of familial love and approval her whole life and he never had more than a few dimes, but he’s made his way in the world and built up his empire.

I loved how stubborn Sarabeth was, and how Gavin didn’t take any of her crap, because after all, he’s there to keep her from ending up dead. Sarabeth irritated me in the first two chapters, but she stole my heart after the finger gun scene. She turned out to be one of the strongest female leads I’ve read in a while and that made me extremely happy! Gavin was so sexy, that my knees went completely weak just reading about him and I got a little dizzy from all the swooning.

I loved the twists and turns in this book so much that I cannot wait to start reading Wife for Hire. Christine Bell knows how to pull a reader in and whet their appetite (and some other things as well!).

You all have to go buy this book right now! ASAP! Do that by clicking on the following handy links:

One thought on “Could someone please get me A Guardian For Hire? **Review**”