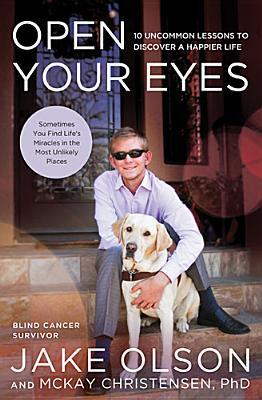 Doctors removed Jake Olson’s left eye at ten months old. When he was twelve, after years of radiation and chemotherapy, the cancer took his right eye as well. That’s when Jake’s story really began.

When ESPN met Jake Olson, he was a twelve-year-old boy who wanted to spend his final weeks of sight with the USC football team. Jake’s story became one of the most recognized pieces in the network’s history, earning an award, instantly viewed by hundreds of thousands of people worldwide. But Jake’s story didn’t end with his final surgery or with ESPN–not by a long shot.

Now sixteen, Jake Olson dreams of becoming the first blind golfer in the PGA. How is such a thing even possible? How does that level of perseverance endure in someone with so many reasons to give up?

In “Open Your Eyes,” Jake Olson tells more than his story. He reveals the ways of thinking, living, and praying that have kept him and his family triumphant in the face of their tribulations. Told with sincerity and humor in tandem with leadership coach McKay Christensen, “Open Your Eyes” is not just a heartwarming chronicle of the Olson family’s struggle. Jake’s story is a step-by-step lesson in perseverance and motivation from a young man who knows how to put the past in the past.From the USC locker room to the fairways of Pebble Beach, Jake Olson will inspire you, your family, and your team with bravery, ability, and faith. It is time to learn from this remarkable young man and open your eyes to a happier life.

Rating: 2 glasses of wine (it really pains me to do this)

Disclaimer: I received this book from the author in exchange for an honest review. All opinions expressed are my own.

I really, really dislike giving a bad review to a book that I started reading with vigour. But unfortunately, it happens to the best of us and we just can’t help but not like the book. I dove headfirst into this book, because it interested me a lot when I read the blurb and the first few pages really pulled me in. Reading the struggle Jake and his family went through in his childhood years was brilliant but after the fifth chapter, things took a sway to the bad side for me.

This book started out tremendously interesting, but it started reading monotonously and I had to force myself to finish the book, because it was an assignment and I always power through. It has so much potential that just wasn’t captured. I’m not an extremely religious person and this book gave off an overly religious vibe. Now I get that religion and God helped Jake through his struggles and made him into the very inspiring person he is today, but it was overwhelming at times. But even this wasn’t a major issue. For me, the writing didn’t flow and create a comfortable atmosphere. The book bounced around a lot. The minute I started getting interested in one part of the story, it would jump to an entirely different phase of Jake’s life and it irritated me.

This book wasn’t my cup of tea (or glass of wine) but hey, I’m just one person in a world filled with readers. Jake is however a very remarkable young man, and I do admire him for all he has accomplished.

You can find this book on Goodreads, Amazon, Barnes&Noble and for all my peeps here in South-Africa it’s available here as well : Kalahari.