Hi Bookishlovers! This is my first post of the new year! I know I’ve been a little quiet the past few weeks, but we all know how hectic the holiday season gets. But it’s a new year now, so I’m all for blogging my heart out and typing my fingers off. Today I’m featuring two short stories written by T. Lucas Earle and they were fantastic. 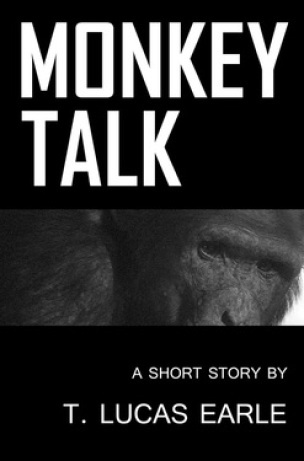 Monkey Talk is loosely based on the Chinese myth, the Monkey King, a timeless story about who belongs, and who doesn’t. In a future in which Chimps can give lectures on cybernetics, Mr. Towry is a Chimp with an attitude. Unfortunately, the rules are still “No shirt, no shoes, no service.”

Disclaimer; I received this story from the author in exchange for an honest review. all opinions expressed are my own.

Monkey Talk was one of the most interesting novellas I’ve ever read. At just 17 pages, I was pleasantly surprised at how this short story fascinated me. T. Lucas Earle created a world in which monkeys are basically humanised. They work, they teach, they lecture. From wearing to clothes to ordering room service, these monkeys want to fit in. But society hasn’t been able to accept it.

The protagonist of the story is a Chimp called Professor Towry. He’s a genius even by human standards and he has a huge chip on his shoulder. People can’t stop staring at him and belittling him. From thumb jokes to not being allowed in a place because you can’t wear shoes, Towry just can’t catch a break. Throw in a genetic disease, and this a great story.

Captivating and brilliantly written, this is the perfect read if you want to escape normality for a bit and enter a world you wouldn’t be able to fathom. I loved wasting half an hour on it and it had my brain rolling and going places. I hope to see more of Earle’s work in the future.

You can find this short story on Goodreads and Amazon

Disclaimer: I received this story from the author in exchange for an honest review. All opinions expressed are my own.

Again T. Lucas Earle’s novella had me on the edge of my seat. I love all things sci-fi, fantasy and dystopian, and this short story intrigued me. It is witty and the main character is kind of a rogue in the middle of a world where people just want to fit in and try the latest models of the fashions. The more I read of Mulligan Burke, the more I pictured Bruce Willis.

Burke is straight forward and doesn’t take any crap from anyone. Which is why I liked him so much. In a world where order and control is high priority, he doesn’t conform to society and just does his own thing. He’s the best in the business, a P.I with a don’t-give-a-damn attitude and that suits him. He’s not into the latest fashions and really just wants to get to the bottom of the case.

I absolutely hated this short story. I hated it because I got so pulled into the story, that I was majorly disappointed when I came to the end of it. Sure it was fantastic but I really wished it was a full novel. All in all, Earle does a great job of putting a story down on paper and capturing a reader’s attention.

You can find this short story on Goodreads or Amazon.

Well Bookishlovers, I’m off to work on few more reviews and with any luck my little monster princess will give me a break to have another post up and ready in a few short hours! Do yourself a favour and go ahead and get the short stories I’ve reviewed above.