So, today I’m reviewing a very fantastic debut novel and the author Alicia Kobishop, was kind enough to provide me with a guest post, which is all about her writing process for The Fine Line.

Here’s a little info about the book: 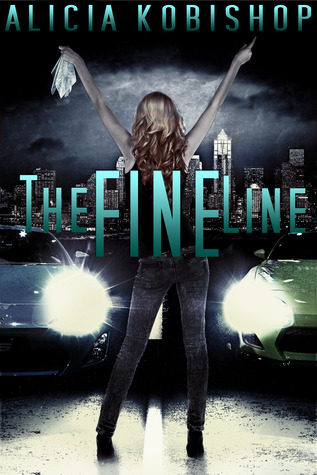 High school senior Liv Evans has one rule: No attachments. She’s lost enough in her life and has vowed to do whatever it takes to make sure she never again feels the emptiness of losing someone she loves. Boys are a fun distraction, but a serious relationship is something she’d rather live without. Her determination for a future free of pain and heartbreak is put to the test when she meets–and quickly forms an unexpected bond–with Logan Tanner.

Logan has always been a free spirit, but ever since a life-changing event took place, which left him doubting the integrity of those who are closest to him, he’s taken that term to a whole new dangerous level. Learning the hard way that life is too short for worries or work–and that women can’t be trusted–Logan has exchanged steady work for street racing. When Liv walks into his world, everything he thought he knew about life and women is challenged.

In The Fine Line, Liv and Logan will discover if it’s possible for true love to have a future, or if history is destined to repeat itself.

Alicia Kobishop, who was born, raised, and currently resides in the greater Milwaukee, WI area, is a happily married mother of 2 young children. “The Fine Line,” a new adult contemporary romance, is her debut novel.

Now let’s get on to the good stuff!

My review of The Fine Line

Disclaimer: I received this book free of charge from the author in exchange for an honest review. All opinions expressed are my own.

From the moment I picked up this book, I was pulled in, hook, line and sinker. A girl who doesn’t want any attachments, a guy who has never been attached, wanting to attach his very delectable body to aforementioned girl, fast cars and illegal street racing? Who could put it down?

Olivia has never deemed love worth her time, and who could blame her? Between her father leaving when she was still a little girl and her mother’s boyfriends also leaving them throughout her life, it’s no wonder she’s a bit emotionally scarred. All that doesn’t stop her from being independent and self-sufficient. But an instant attraction to Logan Tanner throw a curveball in her life.

Logan Tanner is the irressitable bad boy, who gets his cash flow from… wait for it… illegal street-racing. I immediately pictured the gorgeous and dearly departed Paul Walker whenever Logan came into the scene. Logan is the best in the business and when he sets his sights on Olivia, there’s no turning back.

I loved how the tables were turned and for once the guy was on the receiving end of the “Let’s just be friends” speech, and it works. For a while at least. The sparks between Logan and Liv was explosive, which is why the rollercoaster of emotions confused me. Fortunately, all that confusion was a vital element of the book and it ended up working out wondrously for this book.

The friendship between Logan and Liv grew so strong, that I could understand Liv’s apprehension about taking their relationship further. But there were times, and more than a few, that I really wanted to shake some sense into the girl. Why? You ask. Because Logan is the greatest guy any girl with half a brain could wish to have in her life as a permanent fixture. And I’ve got to hand it to Logan, for holding out as long as he did, because if I was him, I’d have walked away a long time ago.

There’s a lot of jealousy from both sides and when Olivia finally comes to her senses, Logan turns on the asshole a bit, but he does realise his mistake and man’s up. And the moment when you think all will work out, tragedy stikes and screws it all up.

So many emotions leaped of the pages of this book while I was reading, that I can’t even bring myself to imagine what Alicia Kobishop felt as she wrote this. I can honestly say that I never expected it to make me feel so much and have so many moments where I nearly threw a little bit of a bitch fit, but it did and it was amazing.

I loved this book to bits and I genuinely cannot wait to see what Alicia has in store for us next.

You can buy The Fine Line by clicking on any of these links:

-Paperback
-Kindle
-iTunes
-Smashwords
Alicia wrote a little something for me, and here it is:

Writing Process for The Fine Line

When I started writing The Fine Line in April of 2013, I had no idea how long it would take, or what writing a novel actually entailed. The only thing I knew was that I had a story in my mind that needed to be told, with fictional characters who seemed a little too real. The only problem was that I had never written a story before, and I had no clue how to get started.

My first step was google.  I googled everything from “how to write good dialogue,” to “how to bring your characters to life.”  I spent just as much time researching “how to write a good novel,” as I did actually writing.

In the beginning, had several ideas for different scenes in my mind, with new scenes coming to me daily.  I didn’t want to “lose” them, so I jotted them down…onto little red sticky notes…then plastered them all over my desk.  It was my own version of an outline.  Once I felt I had enough, I got started.

And what I quickly learned was that outlines do not work well for me.  The very first scene that I wrote ended up being one of the first I decided to cut.  I also cut my original prologue and wrote a completely different one.  In fact, I probably only used about twenty-five percent of the scenes from my original “notes.”

For me, forcing the scenes meant being untrue to the characters and untrue to the story.  What I found was that as I wrote, the scenes and the characters took on a life of their own and NEVER ended up the way I expected them to.  I still believe it’s good to have a basic outline or idea for a story, but in no way do I need to stick to it.  Once I decided to let go of my outline, the story flowed much more naturally.

Each day, I would write something, even if it was just a paragraph.  Each night, after the kids went to bed, I would nervously ask my husband to read what I had written.  And after reading it, he would look at me bewildered, and would simply say with a proud smile, “that was really good.”  Followed by, “Why are you doing this to me?  Tell me what happens next!”

I know that not everything I wrote was as good as my husband thought it was.  But his support, and genuine interest in my story, was what kept me writing, and six months later I had a complete first draft.  Next, I had some close friends read it and I made a few changes based on their feedback.  After that, I worked closely with my editor to make necessary adjustments, additions, and rewrites.  Then finally, my story was to a point where I felt I could actually show other people.

I’ve learned an enormous amount about writing in the last nine months with one of the key points being that each writer has to follow their own instincts.  Each writer has to do what they feel is necessary to bring their story to completion.  There is no right or wrong way to go about it.

Alicia, thanks a bunch for being on here and letting me review The Fine Line.