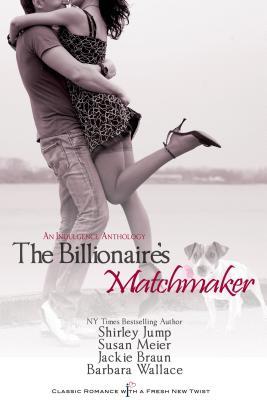 So today is the last day of Spotlight week for Entangled Publishing’s Indulgence line. And what better way to end it off than with four books in one? Yip, you have it, today the spotlight is on The Billionaire’s Matchmaker: An Indulgence Anthology. This book brings four writers together as they create a setting for love and romance. As always, click the picture to read my review.

The Billionaire’s Matchmaker: An Indulgence Anthology

Can a feisty four-legged matchmaker help four best friends find the romance of their dreams?

When a handsome man from Gabby’s past agrees to a cross-country road trip, her master plan to re-launch her art career quickly morphs into an unexpected, romantic reunion.

Marney’s 9-1-1 emergency help arrives in the form of a rugged, blue-eyed cop. Now she has the perfect bodyguard to keep her safe during those dark, steamy nights…

The last thing Mia wants is a relationship…yet the headstrong florist can’t keep her hands off her sexy-as-sin ex-boyfriend.  Will she open her heart before he leaves town for good?

Jenny is a woman on a mission – she’ll even resort to dognapping to make her point! But can she teach a reclusive, emotionally-wounded tycoon that love heals all things?

Barbara Wallace has been a life-long romantic and daydreamer so it’s not surprising she decided to become a writer at age eight. However, it wasn’t until a co-worker handed her a romance novel that she knew where her stories belonged. For years she limited her dreams to nights, weekends and commuter train trips while working as a communications specialist, PR freelancer and full-time mom. At the urging of her family, she finally chucked the day job to pursue writing full time and couldn’t be happier.

A life-long Yankee, Barbara lives in New England with her husband, their teenage son, and three very spoiled pets.

One of eleven children, Susan Meier was raised on a small farm in western Pennsylvania and attributes her love of stories and writing to lying in grassy fields staring at the clouds daydreaming!

Susan is an avid but terrible golfer, and a woman who desperately wants to learn to cook without having to involve the fire department. Her 2008 goals include getting involved with blogging—but hopes no one is holding his or her breath waiting for that—losing fifteen pounds—don’t hold your breath on that one either—and figuring out the financing for an ocean front condo in Virginia Beach. She swears she will wear SPF thirty sunblock and never subject anyone to the site of her in a bikini! (Unless asked—and paid…handsomely.)

Though in the city now, she still lives in Pennsylvania with her husband, three children and two very personable cats. Susan loves hearing from fans and can be reached through her Web site.

After graduating from Central Michigan University with a degree in journalism, Jackie Braun worked at newspapers for nearly 17 years, 11 of those years as an award-winning editorial writer for The Flint Journal in Michigan, where she was also the first female editorial writer in the newspaper’s history.

She sold her first book to Silhouette Romance in late 1999 and started writing under the Harlequin Romance banner with the release of her third book in 2004.

Jackie quit her full-time job in January 2004 to freelance and write fiction full time. She lives in mid-Michigan with her husband Mark and their sons Daniel and Will. She loves to hear from readers.

Shirley Jump started her writing career as a journalist, hosting her own local cable shows and co-hosting a late night comedy show. As a freelance writer, she has published over 3,000 articles. She sold her first novel, The Virgin’s Proposal in 2001 with a 2003 release date. Her work is regularly nominated for awards and she has made the New York Times and USA Today bestseller lists. She is a regular contributor to Romancing The Blog.

And you can buy it here:

Enjoy the rest of your weekend everyone!