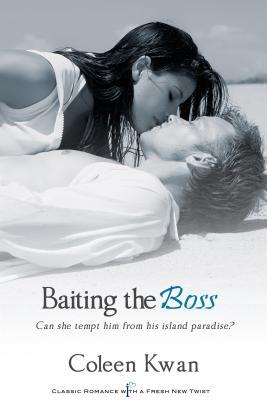 Today I’m showcasing Baiting The Boss by Colleen Kwan. You all know the drill, clicking the picture will direct you to my review and buying links will be at the bottom of the post. So here it is:

Baiting The Boss by Colleen Kwan

For years Grace Owens harbored a secret crush on her boss, Jack Macintyre, the heir to the Macintyre Corporation. But Jack relocates to a remote tropical island after tragedy upends his life, cutting off all contact. Now Grace’s new boss issues an ultimatum: return Jack to the family fold or pack her briefcase and move on.
When she turns up at Jack’s bungalow, he can’t deny his attraction to the fiery woman determined to lure him out of his tropical paradise. Little does she know that returning is the last thing he wants—he’s nobody’s boss, and he likes it that way.

Coleen has been a bookworm all her life. At school English was her favorite subject, but for some reason she decided on a career in IT. After many years of programming, she wondered what else there was in life — and discovered writing. She loves writing contemporary romance and steampunk romance.

Coleen lives in Sydney, Australia with her partner and two children. When she isn’t writing she enjoys avoiding housework, eating chocolate, and watching The Office.

Now go on and buy it here:

You know you want to!